Any discussion about the Salt approach would be incomplete without a discussion of plug-ins. Understanding plug-ins and Salt’s pluggable architecture is often the “eureka” moment that turns Salt investigators into Salt evangelists.

The basic explanation is this: Salt’s core framework provides a high-speed communication and event bus. This framework connects and authenticates your managed systems, and provides a way for these systems to send notifications.

On top of this core framework, the remaining features of Salt are exposed as a set of loosely coupled, pluggable subsystems.

Salt contains over 20 pluggable subsystems, but most users are interested in only the handful that are used to directly manage systems. The following table contains a list of some of the more common subsystems in Salt:

What does it mean to be “pluggable”?

Salt doesn’t define a built-in way to perform the task for any subsystem, each subsystem simply delegates its work to a plug-in. Salt provides a default plug-in for each system, but changing the plug-in in most cases is as simple as updating a configuration file. This pluggability is what makes Salt so flexibile.

To illustrate, the following diagram shows several of the common subsystems along with the most common plug-ins for each subsystem. 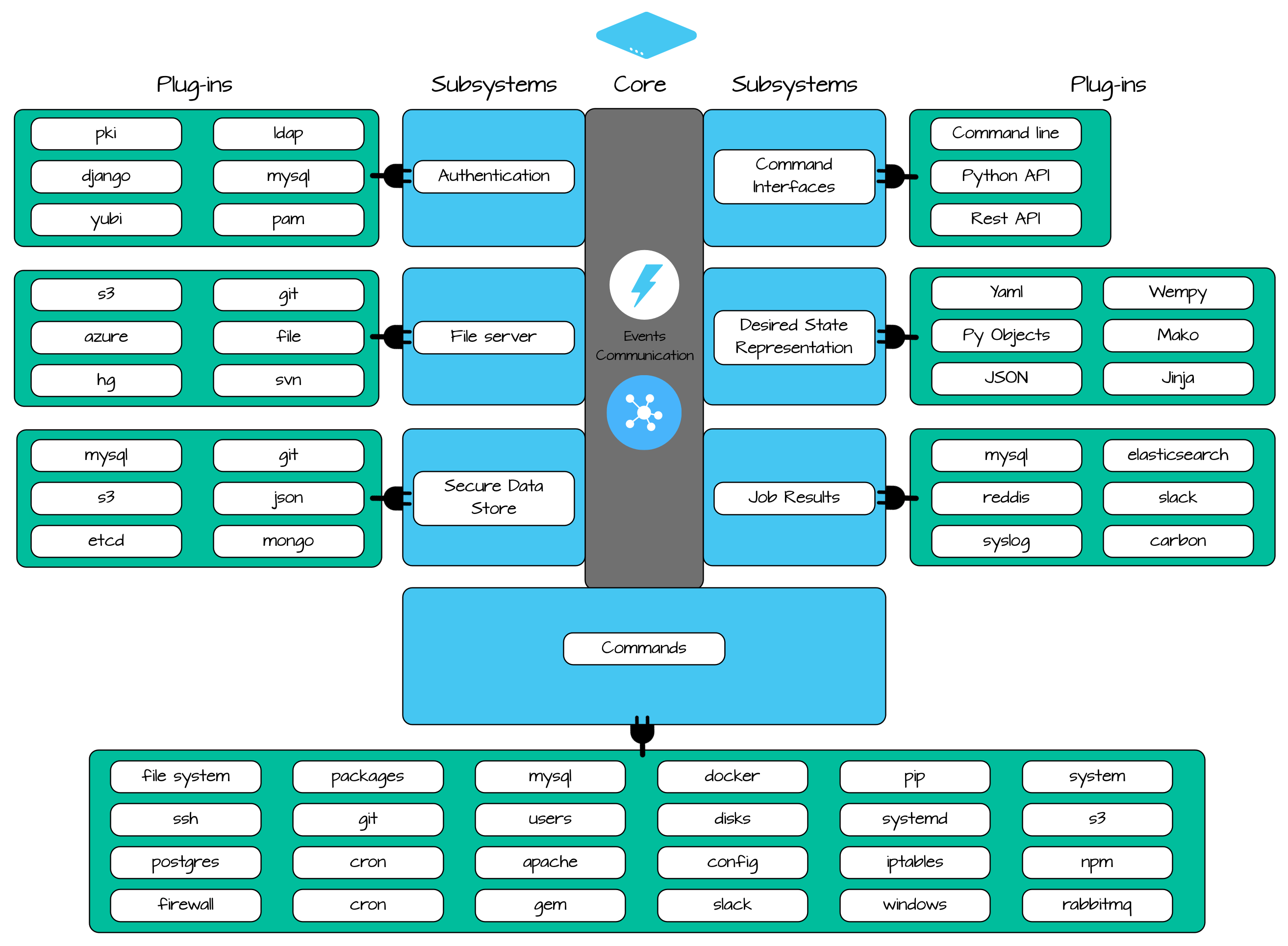 This diagram shows only a handful of the available subsystems and plug-ins, but it should give you a sense of the general architecture of Salt.

Subsystems during a Job Run

When a job runs, several Salt subsystems are invoked in order to process the job. The following diagram shows the subsystem flow of a typical state run or remote execution job:

Plug-ins? It sounds like you are talking about Salt Modules!

In Salt, plug-ins are known by their Python name, module. Since each plug-in is a Python module, most of the time they are simply called modules, or more accurately, Salt subsystem modules (Salt auth modules, Salt fileserver modules, and so on).

As long as you understand that each Salt module is a plug-in that extends one of the many subsystems in Salt, you’ll understand this relationship well enough.

At each step, there are many plug-ins available to perform a task, resulting in hundreds of possible Salt configurations and workflows.

This flexibility makes salt an extremely powerful and customizable tool, but it also makes it a bit hard to answer standard questions when you are learning about the tool.

For fun, let’s take the “technically accurate” approach and answer a few common questions about Salt:

Aside from making you very annoying in conversation, answering questions this way does say something about the Salt approach to management. You know your infrastructure, and in today’s complex environments there isn’t a single best way to do anything.

Don’t let this worry you though, Salt comes out-of-the-box with excellent defaults that are used by most Salt users. The main point is that the flexibility is there when and if you need it.

We’ve covered a lot here, but there is one additional thing we need to tackle regarding modules. Remember earlier when we explained how Salt abstracts the underlying details of the operating system? One way that Salt achieves this abstraction is by using virtual modules.

Some management tasks are performed so differently between operating systems, there is very little code that can be reused between them when writing a plug-in.

To enable this type of abstraction, Salt loads these types of modules using a virtual module name. The aptpkg module contains instructions that basically say “If you are a Debian system, load this module as pkg. Otherwise, don’t load this!” Similar code is present in the yumpkg with a check for Redhat or CentOS. This way multiple modules can exist to perform the same task, but only one gets loaded with the virtual name.

Keep this in mind when you are reading module documentation, as you often need to read the documentation for the non-virtual module to understand the behavior. You can search for __virtualname__ inside a Salt module to find out the name that Salt uses when loading that module.

Still with me? Good. Let’s move on and talk about how Salt communicates on the wire.