Salt uses a simple language, called YAML, to describe configurations. This is what you need to know:

Commands in state files are executed from top to bottom. In this example, the packages are installed before the configuration file is updated because that section appears first in the file. SaltStack also provides a powerful requisite system that lets you explicitly determine order, which we’ll cover in a later tutorial.

Remote execution is a big time saver, but it has some shortcomings. Most tasks you perform are a combination of many commands, tests, and operations, each with their own nuances and points-of-failure. Often an attempt is made to combine all of these steps into a central shell script, but these quickly get unwieldy and introduce their own headaches.

To solve this, SaltStack configuration management lets you create a re-usable configuration template, called a state, that describes everything required to put a system component or application into a known configuration.

States are much easier to understand when you see them in action, so let’s make one. States are described using YAML, and are simple to create and read.

To simplify things, our Vagrant file maps the /srv/salt directory on your Salt master to the local salt-vagrant-demo-master/saltstack/salt directory. This means that you can use a local text editor and save the file to the local file system, and Vagrant makes it appear as if it were on the Salt master.

This state calls the pkg.installed state function, and passes a list of three package names for the pkgs argument.

Save this example as salt-vagrant-demo-master/saltstack/salt/nettools.sls:

Lets go ahead and test our state. We’ll learn about a more powerful method to apply states, called highstate, in the next section, but for now you can use the state.apply command to apply a state directly from the command line.

On your Salt master, run the following command to apply the nettools state:

As you might have guessed, you can use the targeting mechanism to apply this state to any set of Salt minions. For now just pick one or all of your Salt minions. If everything goes well, you’ll get output similar to this (click to enlarge): 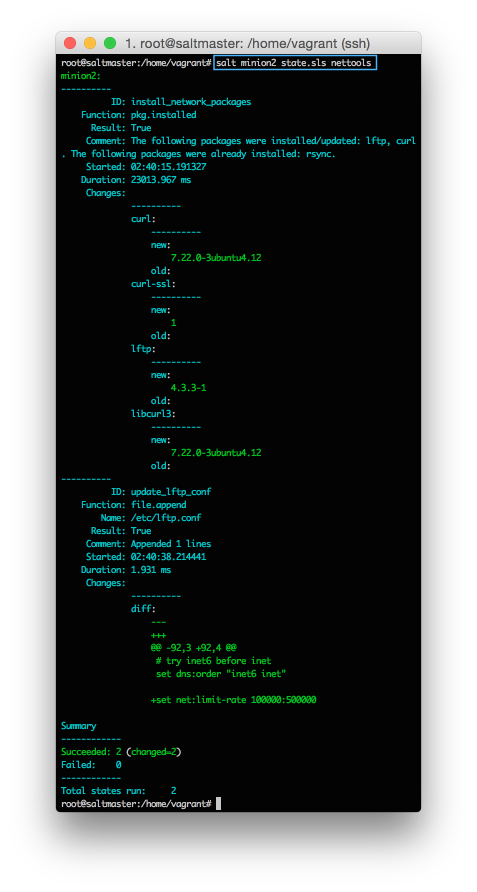 If that is not cool enough, apply the state again to the same Salt minion(s), and look at the output: 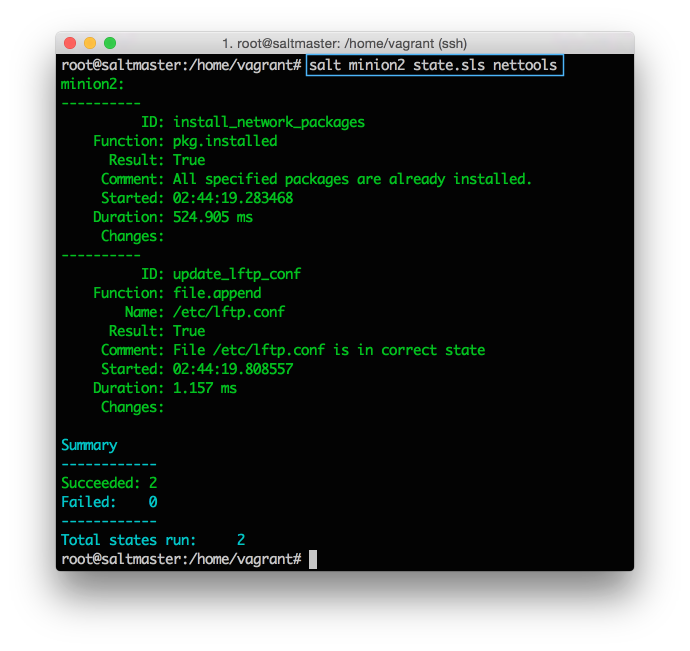 Salt determines that the system is already in the correct state, so nothing is changed (this is called idempotent in academic circles). Nice.

States can restart services when changes are made, copy entire directories, explicitly require that other states run first, use variables, and much more.

You’ll learn more about the state system when you go through the Configuration Management Get Started Guide. For now this basic understanding of states is enough to get started. Remember the powerful method we mentioned earlier to apply states? Let’s tackle that.